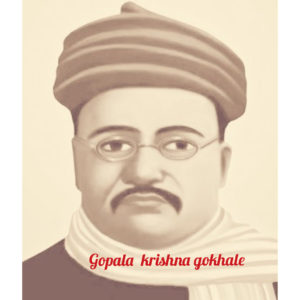 As a senior leader of Indian national Congress,Gopala Krishna Gokhale led some of socio political reforms during freedom struggle.Despite being poor,he learned English education and graduated from elphinstone college. He worked as a clerk under British raj .

Gokhale become the member of INC in 1889 and in 1895 he became the joint secretary of INC in 1895 .In 1905 he became the president of INC .Along with his contemporary leaders like Tilak,Bipin Chandra pal,Lala lajpat rai ,Annie Besant, Gokhale fought for socio-political improvements and also to achieve political representation to common Indians.As a moderate leader of INC,in his presidentship in 1905 he condemn for partition of Bengal and supported anti partition ,swadeshi movement of bengal.In 1907 Gokhale’s candidate Rash Behari Ghosh became the president of INC .In the same session of 1907, split in the congress into the moderates and extremists saddened Gokhale about the future of INC.

Gokhale had good relationship with all the leaders of INC .But still some differences happened with Tilak in Age Of Consent Bill For increasing the marriage age. Gokhale is very much supported and guided by mahadev Govind Ranade and so he called Ranade as his “Guru”.

Formed by Vishnushastri Chiplunkar, Tilak and Gopal Ganesh Agarkar in 1884.Gokhale is one among its members.

Formed By H.Chiplunkar,Ganesh Vasudeo Joshi and Mahadev Govind Ranade.Gokhale started working with Ranade in this association and later he became its secretary.

After leaving Deccan Education Society,Gokhale formed Servants Of Indian Society .The Aim of the society is to train the National missionaries for the service of India.

Hitavada is a daily English newspaper formed by Gokhale in 1911.