The 2011 Protocol ensures that the India-Bangladesh boundary is permanently settled with no more differences in interpretation, regardless of the government in power.

Impact and achievements of LBA

In a landmark judgment, the Hague-based Permanent Court of Attribution (PCA) has awarded Bangladesh an area of 19,467 sq km, four-fifth of the total area of 25,602 sq km disputed maritime boundary in the Bay of Bengal with India

The UN Tribunal’s award has clearly delineated the course of maritime boundary line between India and Bangladesh in the territorial sea, Exclusive Economic Zone (EEZ) and continental shelf within and beyond 200 nautical miles (nm). Now, Bangladesh’s maritime boundary has been extended by 118,813 sq comprising 12 nm of territorial sea and an EEZ extending up to 200 nm into the high seas.

In addition, the ruling acknowledged Bangladesh’s sovereign rights of undersea resources in the continental shelf extending as far as 345 nm in the high seas, taking Chittagong coast as the base line. The verdict has been broadly accepted by both the countries as a positive development for further consolidation of friendly relations especially given the geo-strategic/political significance of greater Indian Ocean region and South Asian sub-region. 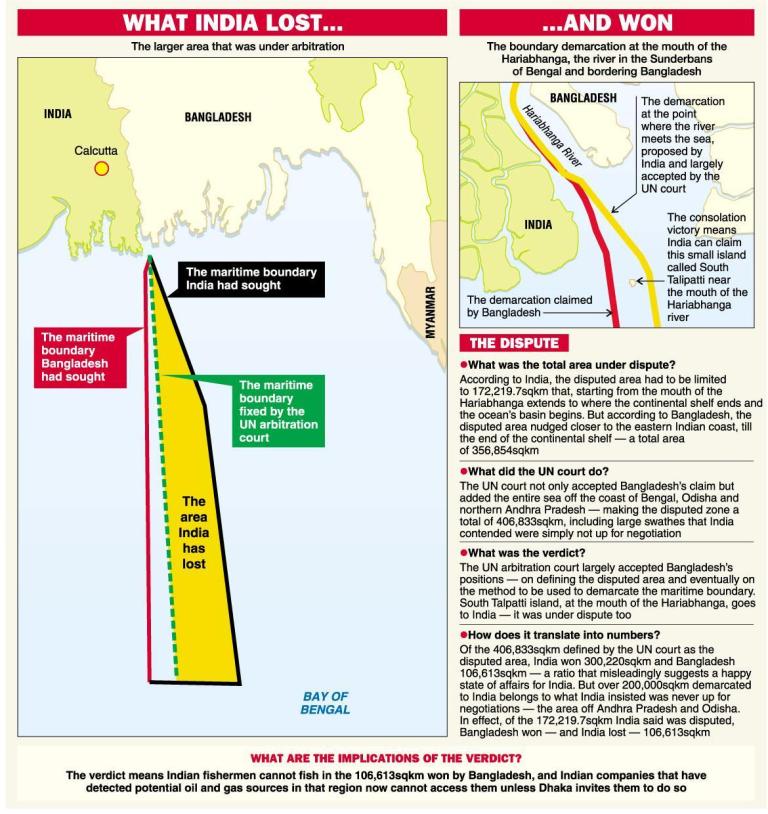 Security and Economic implications for India

The award has huge economic significance for a small state like Bangladesh. It has cleared the obstacles for Dhaka to open up its waters for foreign firms to explore and exploit hydrocarbons in the Bay. So long, Bangladesh’s maritime dispute with India is believed to have deterred many international petroleum companies to invest in the sea-blocks previously offered by it.

The United Nations Convention of Law of the Sea (UNCLOS) gives a nation 12 nm of territorial control and ensures sovereign rights to explore, exploit and manage natural resources with 200 nm of EEZ.

The economic prospects of the Bay region have increased enormously after Myanmar and India discovered huge natural gas deposits beneath the sea. It is reported that Myanmar discovered 7 trillion cubic feet of hydrocarbon deposits in the region. This was followed by India’s discovery of another 100 trillion cubic feet of natural gas. This prompted Bangladesh—a nation with limited resource base and high demand of energy,to search for offshore energy resources.

In 2008, Bangladesh government divided its claimed territorial sea and EEZ into 28 sea-blocks and leased them to multinational companies to meet its growing energy needs.But Bangladesh was eventually compelled to suspend exploration as both India and Myanmar objected to it.Successive discoveries of massive natural gas have made the delimitation of maritime boundary all the more significant.