Convention on the Rights of Persons with Disabilities

Asia and Pacific Decade for Persons with Disabilities, 2013-2022

The Incheon Strategy provides the Asian and Pacific region, and the world, with the first set of regionally agreed disability-inclusive development goals.

ESCAP secretariat is mandated to report every three years until the end of the Decade in 2022, on progress in the implementation of the Ministerial Declaration and the Incheon Strategy.

Enables the region to improve the quality of life, and the fulfil the rights, of 650 million persons with disabilities. 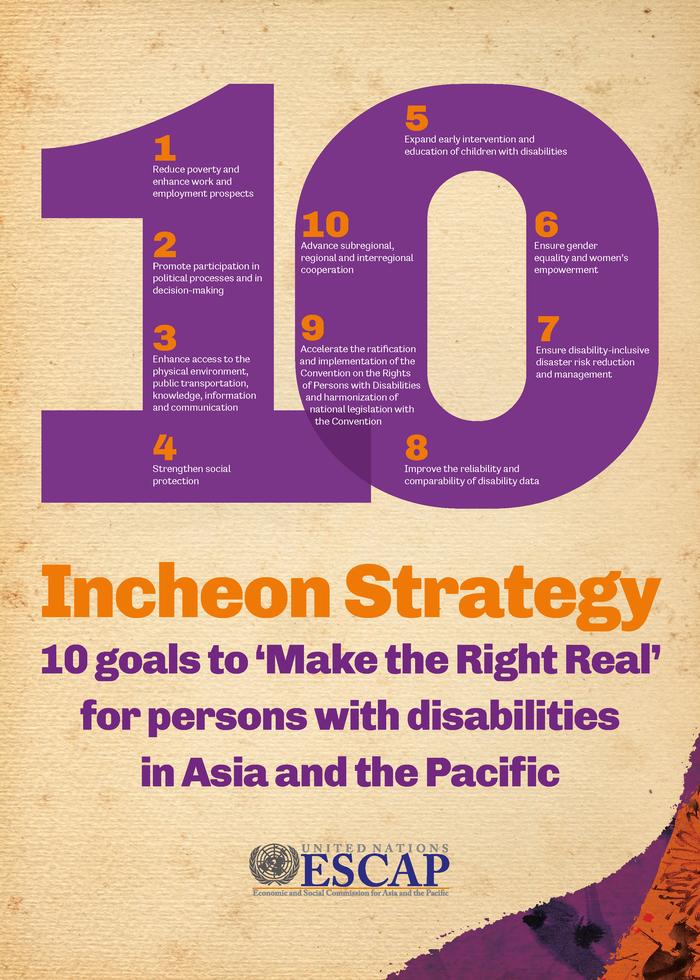 Background on Asian and Pacific Decade of Persons with Disabilities

What is Biwako Millennium Framework for Action?

UNESCAP at its fifty-eighth session, adopted resolution 58/4 of 22 May 2002 on promoting an inclusive, barrier-free and rights-based society for people with disabilities in the Asian and Pacific region in the twenty-first century, by which it proclaimed the extension of the Asian and Pacific Decade of Disabled Persons, 1993-2002, for another decade, 2003-2012.

UNESCAP document that sets out a draft regional framework for action that provides regional policy recommendations for action by governments in the region to achieve inclusive, barrier-free and rights-based society for disabled people. Regional framework incorporates the millennium development goals and targets relating for making disabled people an integral part of efforts to achieve the goal