Constitution is a body of fundamental principles or established precedents according to which a state or other organization is acknowledged to be governed.
A constitution is an aggregate of fundamental principles or established precedents that constitute the legal basis of a polity, organisation or other type of entity and commonly determine how that entity is to be governed.
A single written document that embodies all the fundamental and organic laws and principals of a country or state.

1. The most critical function of a constitution is to provide a set of basic rules that allow for optimal coordination amongst members of the state.
2 A constitution is a body of necessary codes according to which a state is constituted and governed.
3  The constitution specifies the necessary allocation of power between the various segments of the state.
4. Indian diversities necessitated a Union of states, and the freedom movements favoured a democratic form of government. For example, Accordingly the Parliament in India decides laws and policies.Constitution empowers the government to fulfill the aspirations of a society and create conditions for a just society.
5.The part four of the Indian Constitution has provisions for the government to make laws to address many problems prevalent in Indian society.
6.The constitution expresses the fundamental identity of the people in a country. People in a community may have many similar ethnic identities that exist before the enactment of the constitution.
7.The people of a country will have a political identity after the promulgation of the structure by accepting the fundamental laws of the state put forth by the constitution.
8.The individual’s objectives, aspirations, and freedoms should comply with the constitutional regulations of a country.
9.The constitution puts forth specific fundamental laws which cannot be violated by its citizens.
10. It also protects certain fundamental rights of the people living in a country.
11. The constitution of a country defines who are all the citizens of a nation.
12.It also sets the framework that illustrates the relationship between the states or parts of a country with each other and even with the central government.
13 Most of the constitutions in the world are written documents that comprise many articles and schedules.
14.There are still a few constitutions like that of the United Kingdom which do not have one single document, which could be called as a district constitution.

1. The Constituent Assembly of India came into existence as per the provisions of Cabinet Mission Plan of May 1946. Its task was to formulate constitution/s for facilitating appropriate transfer of sovereign power from British authorities to Indian hands.

2. The Assembly was to have proportional representation from existing provincial legislatures and from various princely states. Bulk of these elections was completed by the end of July 1946, under the supervision of Reforms Office under Governor General (Viceroy).

3. The Assembly was to have three sections: Punjab & North-West, Bengal-Assam and Rest of India. The Constitutions were to be formulated for Indian Union, each Section and for each of the Provinces therein. The Muslim League, which had won bulk of the 80 Muslim seats and dominated two smaller Sections, chose not to participate so the Assembly never convened separately in sections. 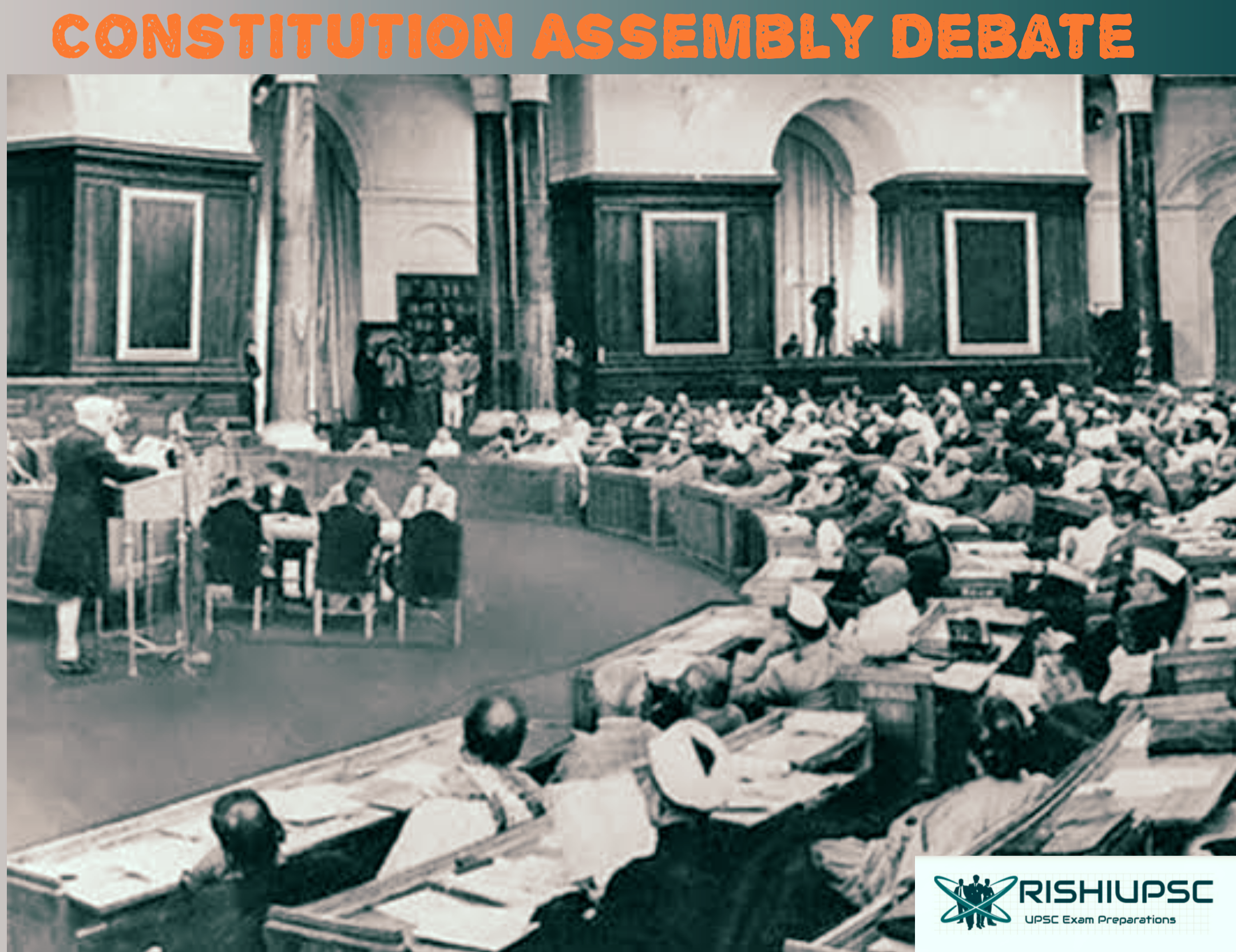 4. Provinces and princely states or group of states were allotted seats proportional to their respective population roughly in the ratio of 1:1 million.

5. The provinces were to elect 292 members while the princely states were to send a minimum of 93 seats.

6. The seats of each province were distributed among three main communities, namely, the Hindus, Muslims, and Sikhs, in proportion to their respective populations in their province.

7. Members of each community in the Provisional Legislative Assembly elected their representatives by the method of proportional representation with a single transferable vote.

8.The method of selection of representatives
of Princely States was to be determined by
the princely states themselves.

1. The 1st meeting of the Constituent Assembly took place in Constitution Hall, New Delhi, on Monday, the 9th December 1946, at Eleven of the Clock.

2. The title of the first debate was “Election of Temporary Chairman,” Acharya J. B. Kripalani (United Provinces: General) requesting Dr. Sachchidananda Sinha to take the Chair as temporary Chairman

Drafting the Constitution and it’s committe :

On 29th August 1947, the Constituent Assembly through a resolution appointed a Drafting Committee to 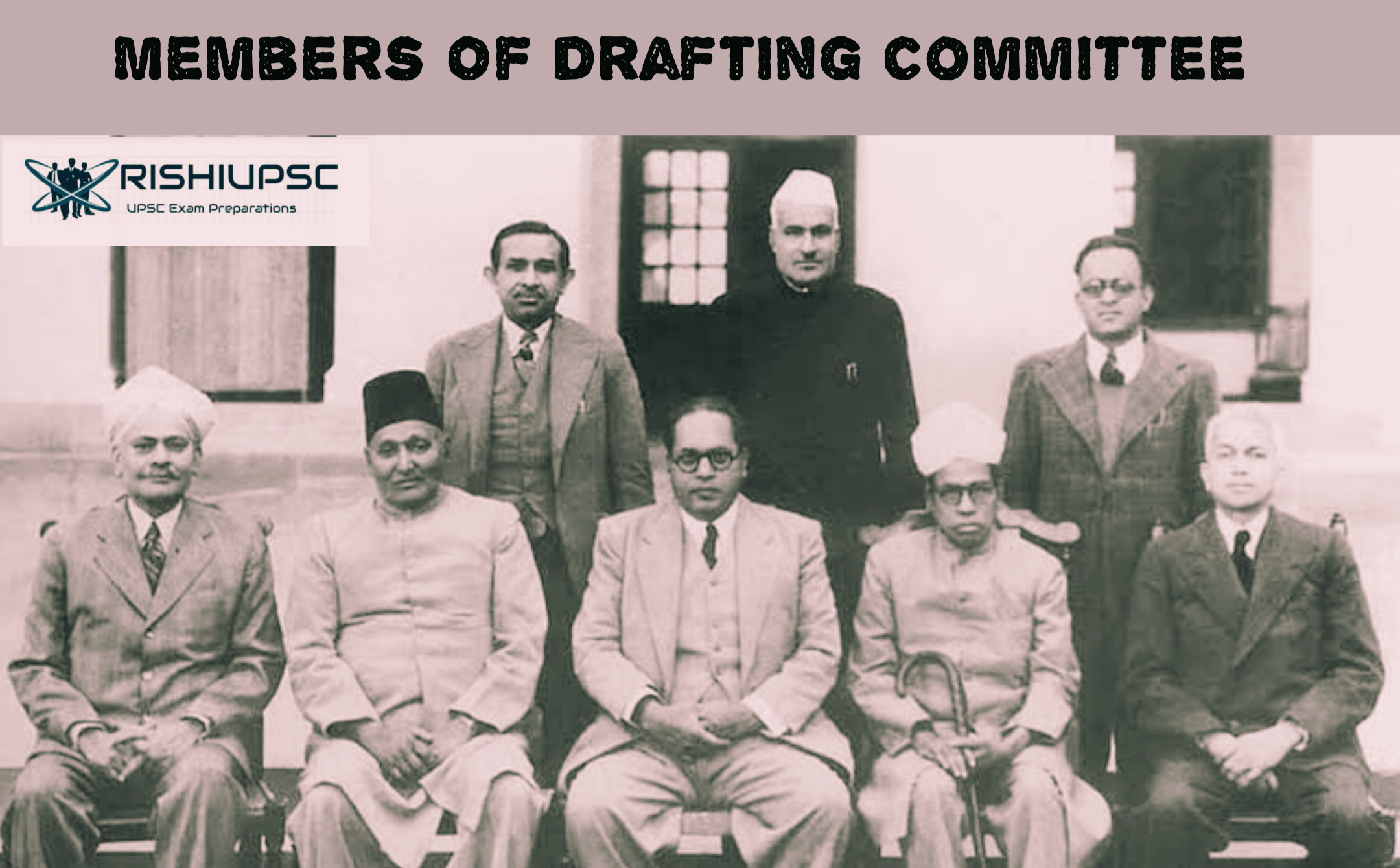 At its first meeting on 30th August 1947, the Drafting Committee elected B.R Ambedkar as its Chairman.